Cast your vote for the new ERS trustee 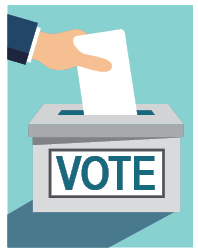 This May, retirees with ERS retirement accounts as of January 31, 2021 will have a chance to vote for a state agency employee to fill the ERS Board of Trustees seat currently held by Ilesa Daniels, whose term expires August 31. Following are some details and key dates. Learn more at ERS Trustee Elections and Appointments.

ERS distributed nomination petitions on March 1. Active state agency employees who are contributing to the ERS Retirement Fund can run for election. Potential candidates must gather at least 300 unique signatures from eligible voters, either through paper petition forms or online through an ERS nominations website. The nomination period closes March 31. After ERS certifies the candidates you can learn about them through ERS’ election  website and an online candidate forum on May 6 (see below).

Retirees who receive an annuity from ERS can vote for trustees.  ERS will mail information about the candidates and a paper ballot in May. You can vote by returning the paper ballot or cast your ballot online via an electronic link that will be emailed to eligible retirees with an active email address on file with ERS. (Update your email address as needed through your ERS OnLine account.) Consider voting online if you can—your electronic vote is convenient, secure and saves money for ERS.

What do trustees do?

ERS trustees oversee the ERS Retirement Trust Fund, the Texas Employees Group Benefits Program (GBP) and other state benefits, such as the Texa$averSM 401(k) 457 Program. The six-member ERS Board comprises three elected trustees and three appointed trustees. Each serve staggered six-year terms; the term of one elected trustee expires on August 31 of each odd-numbered year.