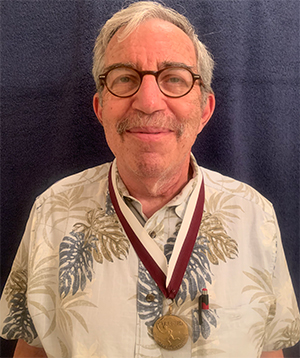 Stuart Greenfield has successfully managed his Type 1 diabetes (formerly called ‘juvenile diabetes’) for more than 50 years, but he’s always grateful for a little help. A significant helper has been the health coverage provided by the state through ERS to both active and retired state employees.

Greenfield was fitted last September with a continuous glucose monitor (CGM), which measures his blood sugar level every five minutes.

“It’s been a life-saver,” said Greenfield, an economist who retired from the Comptroller’s office in March 2000.

Greenfield, who was first diagnosed with diabetes at 19, once relied on cues from his body to tell him when he needed to “get a glass of orange juice or eat a cookie.”

He’s older now and, like many people with diabetes, it becomes harder for him to read his body’s signals, especially when he is asleep. Fortunately, the CGM sounds an alarm when Greenfield’s blood sugar levels dip or spike, “and I know if I should get up for a snack.”

All health insurance plans in the Texas Employees Group Benefits Program (GBP) and Medicare provide coverage for the device.  And Greenfield recommends those with diabetes talk with their primary care provider or endocrinologist to see if a CGM is technology they should be using.

Greenfield, who is currently enrolled in HealthSelectSM Medicare Advantage, has seen many advances in the technology used to treat diabetes over the years.

He recalls using an orange and a syringe to practice making insulin injections, and he remembers comparing his glucose test tapes with a color-coded chart. No matter the tools, Greenfield has been steadfast in his compliance and, in 2016, was awarded the Joslin Diabetes Center’s 50-year bronze medal, which recognizes individuals who have lived with insulin-dependent diabetes for 50 or more years (watch Greenfield’s award presentation).

Greenfield credits his GBP health insurance with helping him achieve his goal of joining the Medalist Program at Joslin, which began awarding medals to people with diabetes in 1948. “While diabetes can be an illness with significant implications, with proper treatment, one can not only survive it, but lead a fulfilling life,” he stated, adding he hopes other people with diabetes will work to become Joslin medalists.

"While diabetes can be an illness with significant implications, with proper treatment, one can not only survive it, but lead a fulfilling life."

With control of his diabetes, this summer Greenfield was able to attend his grandson’s bar mitzvah in Jerusalem and take a Venice-to-Rome cruise. “Having the CGM providing information on my blood sugar level allowed me to walk around these cities with confidence.”